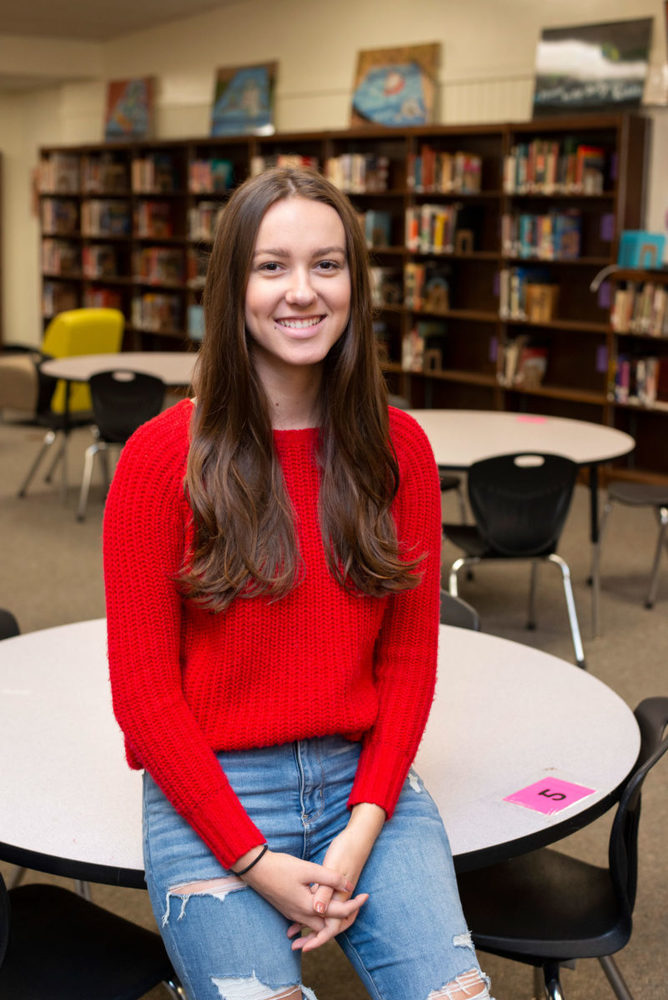 Tackling Period Poverty in Arkansas: A Q&A with Emmarie Gates

LITTLE ROCK, ARK (Arkansas Times) --  If you needed further proof that school librarians can be pivotal forces in young people’s lives, ask 16-year-old Emmarie Gates. When Gates’ librarian at Joe T. Robinson High School in Little Rock handed her a copy of Nadya Okamoto’s “Period Power: A Manifesto for the Menstrual Movement” earlier this year, Gates was shocked at the facts Okamoto cited: that one in four menstruators struggle to afford period products, or that 35 states in the U.S. still tax pads, tampons and other period products as “nonessential” items. Now, Gates is the founder of the first Arkansas chapter of Period, a movement that works to distribute tampons, pads and menstrual cups to those in need, and to educate people about the need for increased access to period products in schools and shelters. We talked with Gates following a National Period Day rally at the state Capitol in October.

Why did a book about period poverty inspire you? Why not, say, a book you read about the Amazon rainforest?

Because it’s a problem that I know I could do something to help. With the Amazon rainforest, other issues like that, I could raise money, but this is something where I could actually see the results, and help my community specifically. Unlike a lot of other issues, this is solvable. You can do something about it, you just need to take steps toward that. And I just thought, “If it’s not in Arkansas, I want to bring it here.”

What did you do first?

Well, the first step was reading that book, which was in our school library. After that, I talked to my friends, and they were actually excited about it. Once I got that feedback, I went to my librarian and she told me how to start a club.

Is anyone else in your age talking about this? What was the reaction?

Everybody that I talked to was unaware of it. People don’t realize this is an issue because we don’t talk about periods. Adults, too.

There is a stigma about talking about periods. How do you approach the subject? I mean, it’s a little different than saying, “Hey, I’m raising money for cancer research,” right?

Well, I like to talk about the statistics I got from the National Period Day rallies, because they are such jarring statistics. One in four women struggled to afford period products last year. One in five girls missed school because they didn’t have period products. And they did a citywide study in St. Louis — the first citywide study on period poverty. Forty-six percent of [low-income] women there had to choose between buying food or buying period products. That’s a lot of people. It is an uncomfortable topic to talk about, for sure. I have to push myself to talk about it more. You have to create that space, and when you do, a lot of people will actually talk about their periods.

What are the mechanics of this work? What organizations do you partner with to get connected to unsheltered people or students who might have barriers to accessing these products?

So, before National Period Day, a lady reached out to me — a grad student named Katie Clark — and asked to get involved, and kind of became our outreach coordinator. She’s amazing. She reached out to Our House and to Arkansas Women’s Outreach, and organizations like that will take these [donated] products and make them into “period packs,” and then we go out to shelters to distribute them, or we give them to shelters — or to schools in need — to distribute. Shelters aren’t allowed to use federal or state money to buy period products the way they can buy other hygiene products, and you can’t use SNAP to buy them, so people end up resorting to unsanitary methods, like cardboard. It can open them up to other medical problems. Someone said to me, “We always expect women to have it all figured out. To always have period products.” This is something that we don’t talk about. They’re expensive.

What is the “tampon tax?”

The tampon tax is the luxury tax on period products overall. So, like everything else, it’s taxed, but it’s taxed as “nonessential.” Obviously, it’s essential. If you don’t think period products are essential, you’re living in a bubble. The idea that they’re luxury items is something we need to fight against.

You held a rally at the state Capitol in October on National Period Day to raise awareness of the ways in which period poverty affects Arkansans, and to start doing something about it. How’d it go?

We had around 100 people show up, and got almost 200 boxes of products donated. Our speakers were probably my favorite part, and they came from a range of places — a representative from a shelter, a therapist who focuses on PMS issues. It was awesome to open up those conversations. I did a TV interview and got a lot of hate on the station’s Facebook page. I started reading the comments, which is not a good idea. I think the main thing I took away from it is that people need to be educated. People were like, “Oh, your mother needs to be helping you with this,” and it’s like, it’s too late to fix that problem. We’re trying to help these girls not miss school. I can’t miss school for one day without falling behind, and the idea of someone missing a week every month is ridiculous.

What’s the sort of pie-in-the-sky goal here? What would you love to see happen?

To donate or get involved, follow Period at RHS and Period Little Rock on social media, or email periodlittlerock@gmail.com.